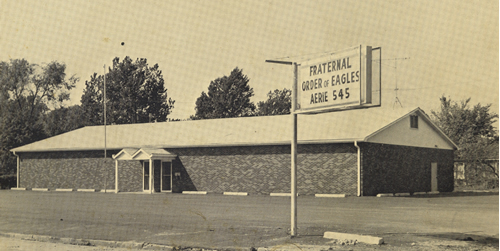 Aerie 545 was founded on November 22, 1903 in East Saint Louis, Illinois with 264 Charter Members. The 1st club was located at Main & Missouri Avenue which was later moved to Collinsville & St. Louis Avenue for a few years. Later it was moved to 18th & Winstanley Avenue for a brief period. It was then moved to 320 North 10th Street, which was the Eagle Home from July 15, 1941 until its demise on June 30, 1965 for the benefit of the Southern illinois National Bank to be erected at that location. It was later relocated to the current location in Shiloh.